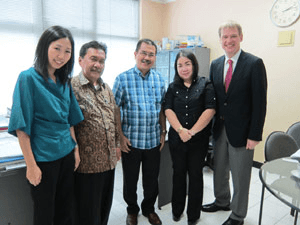 The Chairman of IPERINDO expressed his support of Marintec Indonesia and gave his suggestions for further enhancing the event. He said that IPERINDO saw Marintec Indonesia as an ideal platform to promote the development of the Indonesian marine industry, and that he would encourage all of his members to participate in the exhibition and to attend the conference.